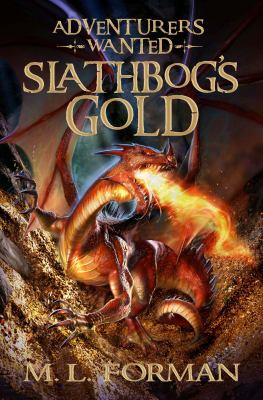 Let me start out by saying that while I enjoy this book, it is actually my least favorite in the Adventurers Wanted series.  That being said, it is still a really good book! It is one of the first books that I hand to teens who want a fantasy series and are just starting to read books from the Teen Zone. I would also have to say that, judging by the number of requests for the sequels, I’m not the only one who enjoys this book.

Slathbog’s Gold is a fantasy novel that I would affectionately call “The Hobbit” lite.   It is less serious or “dark” than the Hobbit, but has many of the same elements.  It centers around fifteen year old Alex Taylor, who responds to an odd sign in a store window that reads “Adventurers Wanted. Apply Within.”  So begins his quest to defeat the evil dragon Slathbog.  Along the way he faces many dangers with his band of fellow adventurers, which includes elves and dwarves, all creatures that he had previously thought existed only in fairy tales.

I liked the author’s world building and I personally would love to own a “magic adventurer’s bag”! If I have one complaint about this book it is that things go a little too smoothly for Alex and his new friends in this story.  For someone who has never been on a quest or dealt with magic at all, he sure gets the hang of things quickly.  In later books in the series things become more complicated and there is more character development, which is why I like them more than this one.  Overall, if you like fantasies that are more fun adventure than ones that are super serious or angsty, then this satisfying series opener is well worth reading!

Hey everyone! I’m Emily Marshall. As the Community Relations Manager for WCPL, I’m usually sitting in front of my computer creating posters in Photoshop, planning library programs, or teaching computer classes. In my spare time, I enjoy reading teen books, watching way too much TV, traveling, playing board games, and trying to convince people that cheesy Hallmark Channel movies aren't “that bad.” I also love messages, so feel free to email me at emarshall@wellscolibrary.org.